Viewpoint, Issues and positions, The History of Cycling

Mission to be continued 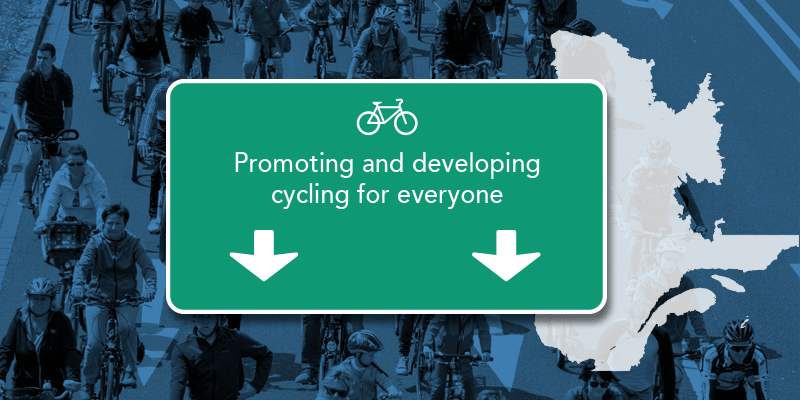 In February, after working at the organization for 35 years, 20 of which as President and CEO, I will be leaving Vélo Québec. Given the current situation of Vélo Québec, I can say with certainty that we have come a long way together!

While the evolution of cycling in Québec is not due solely to the work of Vélo Québec, I firmly believe that our persistence and our desire to change things has helped shape the cycling profile of Québec. Concrete achievements like the Québec government’s adoption of a Bicycle Policy (paving the shoulders of provincial roads, creating the provincial Route Verte bikeway, supporting municipalities in developing bike paths, amending the Highway Safety Code in consideration of the needs of cyclists, etc.); the organization of seminars and conferences to equip all entities able to contribute to the development of biking; the support and defense of the interests of cyclists in order to ensure their safety, the implementation of educational programs in schools to train the cyclists of tomorrow, the organization of events and trips encouraging cycling – so many accomplishments that make me proud of the progress made by Vélo Québec and – above all – the fact that over 50% of Quebecers have now taken up cycing! Especially gratifying news considering that this was the case well before the latest pandemic biking boom!

Today, Québec is by far the most bicycle-friendly province in Canada. With its large cycling community, Montréal stands apart as the biking hub of Canada, while at the same time posting a better cyclist road safety record than major cities like Toronto, Vancouver and Calgary.  However, I would never say “mission accomplished”, since many issues and challenges still lie ahead. Among them, cyclist safety must always be a priority in order to increase bike travel. In this regard, the strategy adopted in Québec by the government, its municipalities and its cycling entrepreneurs is encouraging and showing results: by offering environments favourable to cyclists, Québec has succeeded in creating a cycling culture that is the envy of the other Canadian provinces and reflects positively on our road safety record.

Other challenges facing cities around the world include making more room for urban cycling. To promote sustainable mobility and improve everyone’s quality of life, the importance of cars in the city must be diminished. As some like to say, this isn’t ideological, it’s mathematical! Building safe bike paths for all requires space – space that has been taken up by cars over the past decades.

At the end of the month, I will be handing the reins of Vélo Québec to Jean-François Rheault, a newcomer to the organization, but not to the world of biking. Over the past 15 years, Jean-François has worked for Éco-compteur, a company that organizes, compiles and releases statistics regarding walking and cycling in several cities around the world. A seasoned urban cyclist and keen observer of cycling issues on five continents, he recognizes the importance of data in developing a cause and overcoming prejudices. The Vélo Québec team is solid, competent and passionate. It is therefore in this stimulating environment and with complete confidence that I pass the torch on February 1.  Jean-François can count on my full cooperation in helping him successfully assume his new duties.

I am leaving Vélo Québec in February, but biking will always remain at the center of my life.

Similar posts On similar topics
Viewpoint, Issues and positions, Programs and Campaigns, Sustainable mobility, Cycling Infrastructure, Events and Travel
What will the new year bring us?

In addition to making the traditional New Year’s resolutions, we always like to set certain personal goals and consider what the next twelve months will bring....

Suzanne Lareau
Viewpoint, Programs and Campaigns, Cycling Infrastructure, Route Verte and Bicycle Touring, Events and Travel
Pedalling into the future, one pedal stroke at a time

While we were already aware of the many virtues of cycling, over the past two years of the pandemic, the bicycle has emerged as a formidable tool in transforming so many aspects of our environment. With its numerous benefits,...

In the mid-80s, in order to get people back on their bikes and demonstrate the popularity of biking to various government authorities, Vélo Québec was playing with the idea of organizing a major cycling event modelled after...